Run For Asia is over 500 km long and took Darek a week – he ran from his hometown Łapy to Poznań where Asia lives. She’s the first beneficiary of Zwycięzca Foundation. For the whole week Darek was accompanied by Mikołaj, to whom we’re going to give the floor now…

I remember that unusually warm Sunday in January as if it were yesterday. It was a day when one of the most beautiful adventures of my life came to an end – an adventure full of passion, friendship, sacrifice and a good, honest heart.

The unarguable foreground hero was obviously Darek himself. With the superhuman effort he supported Asia, a girl in need, who was fighting muscular dystrophy and became Darek’s Foundation’s beneficiary. All the other runners who joined Darek also deserve to be called heroes. It doesn’t matter if they accompanied him for a couple hundred meters or kilometres, they all contributed to a great victory. It was thanks to them that Darek would find strength within himself to keep on running when his legs couldn’t walk anymore. It was thanks to them that Darek’s initiative became a common initiative of hundreds, maybe thousands of people. It was thanks to them that his road from Łapy to Poznań was so bustling and effective. And finally it was thanks to them that the Foundation’s money-box was being filled so eagerly that it was eventually full and at the finish line contained enough money to pay not for a part, but for the whole stem cell transplant for Asia.

But this short story won’t be about Darek or his fellow runners, it won’t even be about running, but about incredible people who’d take us under their roofs and make us feel at home at each of the eight sleeping stops on the route of the Run For Asia. I’m writing “us”, because I had the honour and the pleasure of accompanying Darek for the whole 530 km of this unforgettable adventure.

“Darek, where are we going to sleep?”

“We’ll see, worst case scenario we’ll just ask for an overnight stay at some school and if not, we’ll just sleep in the car.”

Those were our entire arrangements regarding the logistics. Totally professional, right? Luckily just before the start we were saved by the irreplaceable Anna from the Foundation – she called a few places, sent some messages on Facebook and in less than two days we had a place to stay at every point on the route. We could set off!

If there was anything that was bothering me from the start, it was how it’ll be to sleep at a different place, at different people’s homes every day. I was wondering if there were going to be any problems with a shower for Darek, with washing the running outfit or using the kitchen. My doubts disappeared by the end of the first day though, and each following stage just reassured me that it’s no coincidence that we meet only kind people on our way. And if I wasn’t sure I was a believer, everything that happened during the Run For Asia gave me the absolute confidence – yes, I believe in people!

Sławek from Zaręby Kościelne, Michał and his parents-in-law from Tłuszcz, Magda from Warsaw, Kasia and Jerzy from Strzyboga, Michał and his family from Łódź, Piątkowscy family from Uniejów, Dominik and Maria from Konin, Ilona and Maciej Łosińscy from Września – all these people particularly contributed to the success of the Run For Asia. If it wasn’t for them, for their hospitality, honesty and good hearts, I’m not sure how it all would end up. They were like our guardian spirits, they welcomed us, strangers, like we were their best friends. There was always a warm dinner and a hot bath waiting for us, together with the same reappearing question – “do you need anything else?”. None of these people let Darek press on without breakfast, some of them provided him with tomato soup in a thermos so he’d “have something warm in case of a crisis”. It was the famous Polish hospitality at its best. Enough said that throughout the entire route neither of us even touched our towels – the good people provided us with everything. And if that wasn’t enough, they all would throw some money into the Foundation money-box when we were leaving. I still can’t believe in all that support and kindness they showed us. Wonderful people!

The run was over, Asia was done with the transplant, Darek managed to get a few more medals, but the memories are still fresh and they’re the most beautiful ones I could wish for anybody, memories full of people you simply can’t forget…

Thanks to you something that half a year ago seemed like a distant dream is becoming a reality today. Thanks to you I’m going to participate in the Badwater run!!!

My joy and gratitude are overwhelming, especially since the budget for this project has been reached 11 (!) days before the fund-raising finished. But it’s not over – there’s a chance to make a documentary about my return to Badwater. From now on we’re collecting money for that purpose. I trust that these few days left until “Badwater 2014 – the return” action ends are enough to gather the amount of money needed to rent some gear and a tiny filming crew to shoot and edit the movie.

If we succeed and the movie is shot, it’s gonna be a priceless and unique token from that incredible trip we’re all a part of. If I can ask you for just one more thing, please continue to raise the funds and share the information about my project.

Disabled runner who motivates hundreds of people with his achievements. Although he’s visually impaired in one eye, has a right arm contracture and right leg paresis, he doesn’t stop fighting for his dreams. This year he wants to run the famous Badwater Ultramarathon for 217 kilometres that is going to take place on the 21st of July in the USA. Darek already tried to beat this race two years ago, but lost to the weather, heat stroke and time limits. After months of hope and anticipation Darek has a chance to return to that fight. The first Badwater attempt is depicted in the award-winning documentary titled “Zwycięzca”.

DAREK ON THE PROJECT

The project “Badwater 2014 – the return” is aimed to prove that a disabled Pole can also achieve a lot. When I was 8 years old, I was hit by a truck, which resulted in right side paresis. I had a few surgeries, at first I couldn’t walk, but after years of rehabilitation I regained partial functionality, and one day, despite physical limitations, I started running. And so for the last 10 years I’ve been regularly participating in marathons, and for some time now – also in ultramarathons, where the routes can be up to a few hundred kilometres long.

I really wanted to introduce myself and the project to you in a video and ask you for help this way, but during the filming I got so nervous it didn’t work out at all. Luckily my friends helped and prepared a video where instead of talking I’m doing what I do best – I’m running. Where? Let me tell you.

In 2012 I participated in the legendary ultramarathon Badwater in the USA with the total route being 217 km long. Since then, returning to Badwater became the most important goal in my running life.

This ultramarathon is not only about the deadly distance, but also extremely hostile desert weather. Temperature in the shade can reach 50 C during the day and even 40 C at night. In 2012 I didn’t manage to finish the race and at the 115th kilometre, after many hours of fighting with the heat stroke, I had to quit due to exceeding the time limit. But I promised myself that sooner or later I’d come back there and do everything I can to finish Badwater.

The opportunity to return to this legendary place will occur on the 21st of July – the organizers remembered me from my previous attempt and approved me as a participant on this year’s start list. Despite my failure last time I must have made an impression if I was accepted among the one hundred carefully selected contestants.

My dream to get back to Badwater can be fulfilled, but in order for that to happen I need your support. The previous trip was financed by a sponsor, but I couldn’t find any this time. This year I can count only on myself. And you…

Back then I took part in Badwater quite on a hoof. I arrived in the USA a day before the start and had no chances to adapt myself. Today I’m sure this was the major factor contributing to my failure. That’s how I know that this time I need to be there a week before the race. It should suffice for practicing in the local conditions and adjusting my body to the desert climate. I also need the support of two experienced people who will be my guides, motivators and who will pour water on me when the heat becomes unbearable. 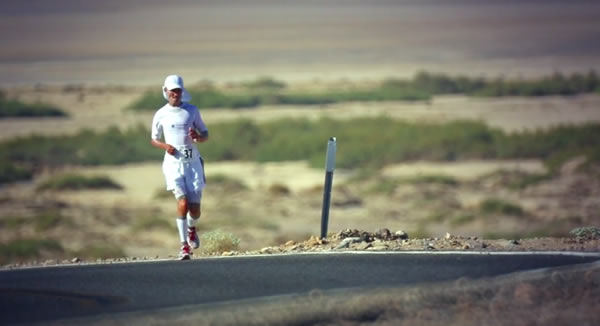 I believe that if these conditions are met, I’ll reach the finish line this year. But without your help it’s not gonna be possible, that’s why I ask you again to support my project “Badwater 2014 – the return”!

The biggest financial challenge is the flight from Poland to the USA and back for me and the two of my trusted teammates. Another significant expense is renting a car, which is a mandatory element required by the ultramarathon’s organizers. If we add the prices of a hotel, insurance, starting fee and other necessary expenditures, the whole amount, even with the most frugal approach possible, will exceed 30 000 PLN. I’m aware that this is a lot of money, but I also know that fulfilling one’s biggest dream is worth even more…

Just a few more words about my preparations for this big challenge. I just came back from Greece where I participated in Dolichos Ultra Race ultramarathon. Then I’m going to run in Ultrabalaton in Hungary in June – another long route of 212 km. The last race before Badwater is Bieg Rzeźnika, taking place on the 21st of June in Bieszczady with an 80 km long route.

Additionally, I run between 20 and 50 km a day in Podlasie where I live. In addition, a couple of times a week I run from Łapy to my workplace in Białystok, where I’m a warehouseman’s assistant at a sporting goods store.

If you want to keep up to date with my runs and preparations for Badwater, I strongly invite you to visit my Facebook profile where I try to post as much news and trivia from my runner life.

I’d like to thank everybody who crosses their fingers for me and supports me in fulfilling my dream!

I’d like to also thank Kuba Górajek from SensiMedia for editing the video. Big thanks for my friends as well for preparing wonderful gifts for my donors!